This year was my second time Running this event and was quite the honor that this time I was part of the Represent Running Ambassador Crew. The 408k is the first in the ”Run The Bay” series with 2 other events later in the year. One in San Francisco (the 415k) in July and one in Oakland (the 510k) in October. the 408 comes from the zip code in which it is held – San Jose where the course is 8k from SAP Center to Santana Row, 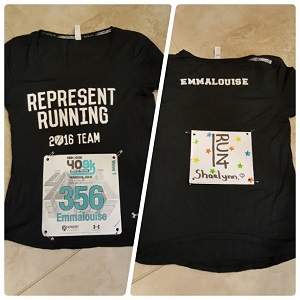 Living in Mountain House (on the boarder of East Bay / Central Valley) the drive down to San Jose is long but I feel worth it for these events. I drove down the Friday before to pick up my packet an also met JT from Under Armour who are the sponsors for the event and kindly provided all of us Ambassadors with Shirts, Shorts and Shoes. How awesome is that? Anyway, packet pick up was easy as it was fairly well sign posted and I just needed my bib number. I was hoping there may be some more vendors there selling Running gear but Under Armour was present with some nice items.
I managed to pick up my Shirt and Shorts for the events but no Shoes were on sight so I had them mailed to me at a later date. When they arrived I was overjoyed, it really was like Christmas and I am so grateful for such a generous gift. The shoes are the Speedform Gemini 2 and so comfortable and lightweight. 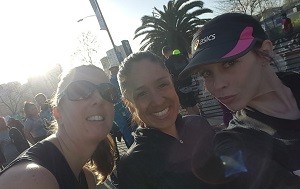 Race day morning and another long drive I planned to meet with the rest of the Ambassador Crew and members of my Running Club at the Start line where I was ready and waiting from around 7:20am. It wasn’t at all busy at this time and I even had time to use one of the many porta potties before introducing myself and having  a group photo with everybody. I am terrible with names but I do know I met Sharon (IG: RunHikeNPlay), Christina ( IG: LittleBeastling), Jason (IG: RunningMileCom) and of course Brian (IG: PavementRunner). Everybody was so friendly and full of energy, it’s great to be part of a group of people that share my passion.

Thankfully after rain forecast for the Morning we got very lucky and  the weather was cooperating, beautiful blue sky and no sign of rain which meant the Race started without any hitches and on time.
I decided to Run this event with 2 members of my Running Club at their pace instead of trying to PR, my time last year was 34 minute and I couldn’t remember more than 20% of the course so I thought being Ambassador it was a good idea to aim for 40-55 minute finish time so that I could take in the course and event. The first mile was a mass of people all finding their pace and I was happy running alongside my fellow MHRC members and talking about the race series and other 2 races later this year. It was about the 1.5 mile mark that 2 of us broke off at a faster face and continued along the course conversation for the duration.

Mile 3 came around quickly which was memorial mile and the one part of the course I remember the entire of from last year. Seeing Veterans come out to cheer US on blows my mind! There didn’t seem to be as many people lining the streets this year which I put down to the earlier threat of Rain, I spotted a gentleman I recall giving ”high-five” last year and veered off to the side of the course for a repeat. It wasn’t until after the event I found out that this was actually one of the other Represent Running Ambassadors Dad!! Hoe cool is that?

Mile 3 gave way to 4 where we saw Mariachi Mile and my Running companion took a couple of pictures and nearing the finish we picked up pace  a little and in no time were turning the corner onto Santana Row, down the home straight and over the Finish line where I heard the announcer call my name and that I was one of the race Ambassadors, that was kinda cool and totally unexpected.

Finish time? 42 minutes something.. I think. 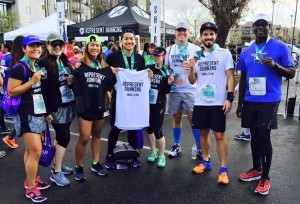 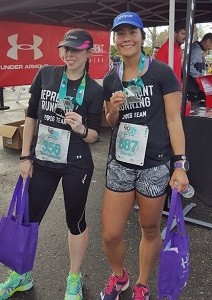 Post race we hung out around by the Under Armour booth where other MHRC members and some of the Ambassador crew found us and took pictures. Pot race snacks were on hand with Banana’s and little baggie with fruit snacks, Go Macro bar and some Corn snack thing. I’m so glad this year had Banana’s after being handed an Apple last year. 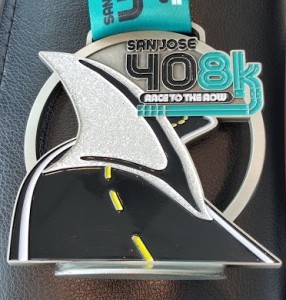