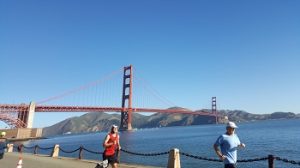 Running the Golden Gate Bridge never gets old and  I was pretty excited at not only running this race for the 2nd time but also running over the Bridge for a 5th time. The course for the 415 starts is Sausalito, goes over the bridge and ends in Aquatic park directly opposite Ghirardelli. It’s nothing too strenuous with one big incline as you come onto the bridge but otherwise suitable for all runners. Oh and the views.. totally worth the incline and getting up at silly O’clock in the morning.

My morning started at 4:30am with the drive down from the Valley where I arrived for the shuttle at 6:15, these buses start at 6am and take you to the start line. I had got there early enough to find that there was no wait for me to get onto the bus so I hopped on and was in Sausalito by a just before 6:40 with a quick stop at the restroom I was waiting for my 7:30 (wave 1) to tart by 6:50! It really does may to take notice of the emails regarding the race beforehand. 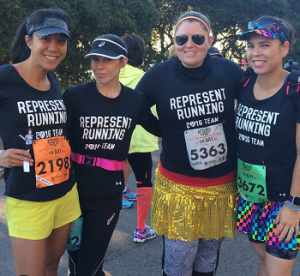 Before the race was due to start I had arranged to meet with fellow race Ambassadors and members of my Running Club for some before pictures, sadly I missed my Running Club due to them all starting in later waves but I got to hang out with some of the female Ambassadors for a while and while we were chatting we heard JT announce at the start line that if there was someone in the crowd to sing the National Anthem then to step up, Christine (fellow Ambassador) joked about knowing the words.. at least we thought she was joking. A while later she announced she was off to see what was going on nearer the start line only minutes later we hear JT announce someone is ready to sing, I look at the other Ladies and exclaim ”It’s not.. she isn’t… Is she??” queue us all running down to the start line to see and support her, only we missed it and got there just in time to see her sing the last few words before laughing and hopping off the stage. Way to represent Christine, girl you gutsy! 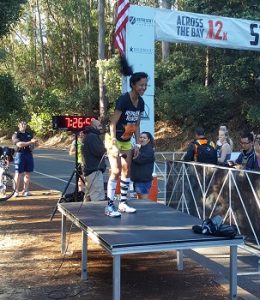 Anyway.. the Run itself. As I was in wave 1 as soon a I congratulated Christine I had to jump in line just in time to set off. The Run itself it went pretty well. After already Running an average of 15 miles a day for the 9 days previous my feet hated me (think huge quarter sized blister) and I wasn’t expecting to be finished in less than 1:15 yet once we started off my legs just went into autopilot. The first mile or so was a little congested where I was able to briefly chat with other runners until they dropped behind me at the hill leading up to Golden Gate bridge, running over the Bridge is an amazing feeling where I stopped a couple of times to take pictures for my I Run 4 buddy and thought I spotted Whales in the Bay (later confirmed by friends). Miles 3-5 seemed to go by in a happy blur where when I realized where I was I was very aware of how freaking hot I was and that maybe double layers was not such a good idea. 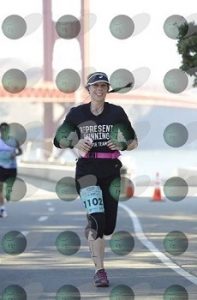 The last few miles I paid a little more attention to my surroundings, being around The City it’s kind of a must and had me notice how great the volunteers were all cheering as I ran past and I spotted the Roli Roti truck pulling into Fort Mason ready for the Farmers Market (darn that delicious Chicken!) The final downhill before the finish line was not fun on my knee’s but then coming across the finish line to cheers and announcement of my name was pretty awesome. Both Hubby and a fellow member of my Running club immediately came to my side for a Finish Line picture while the course behind me was empty. 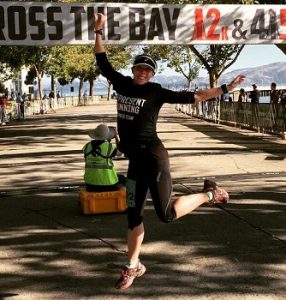 After a quick chat I walked with Hubby down to collect my medal which is some pretty sweet bling before grabbing my little goodie bag of food and chilling on the steps by the water for a moment to dry cool down a little and hydrate as I realized I had carried my new Nathan water belt all of the way and not taken on sip. Ooops.
During my sitting there I spotted another Ambassador who had ran the 5k so we chatted for some time while more of the crew filtered over the Finish line where we called them over and got a couple of group pictures before I had to head off. 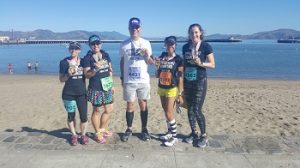 Before I walked to the car I decided to check my time and despite the crazy amount of miles covered in the week before I was amazed to see I finished 7th out 2,800 females!! (Plus an age group win but they don’t give prizes for those). Official time: 55:47( 7.58mi / 7:26min mile). 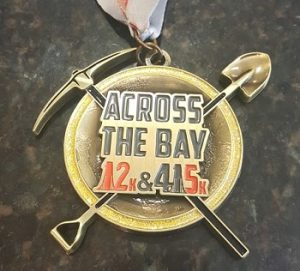 Safe to say that from a runners view everything went as it should and this was a very successful event for Represent Running. 2 races of the series down, 1 to go!!