Laparoscopy is no joke, after a rough weekend of recovery it’s really hit home the importance of having regular health check as had it not been for a regular Pap Smear my Melon sized cyst would not have been detected. The last 3 months since being diagnosed has been really stressful with numerous tests and meetings with Doctors where it all started to get too much until I realized it could have been a lot more serious and I can’t stress enough having these regular health checks.

Going back 3 year ago I was admitted to to the ER with excruciating abdomen pain where it felt like my insides were being twisted and pulled out, I was in agony for 6 hours and finally after morphine drip and other pain meds to the pain subsided enough for tests only nothing was found and I was allowed to go home with no further pain. My menstrual cycle went a little let’s say ”wonky” where I would go months with nothing and then 2 cycles in one month. I’ve had phases of this in the past so didn’t think too much of it as I was also diagnosed with Under Active Thyroid.
Fast forward to January this year and a routine Pap Smear showed ”unusual swelling” where I was sent for Ultrasounds, both internal and external which showed a Melon sized Cyst on my right Ovary and an incredibly full Bladder where the Cyst was preventing me from completely emptying when I use the bathroom.
Initially I was told that the Cyst was Orange sized and that simply monitoring it would be a good idea before I decide on Surgery but after a few week and Abdomen pain for almost a week I was admitted to ER again for more tests where it showed the Cyst was actually the size of a small Melon. With this in mind I decided to go ahead with Surgery.
The size of the Cyst being inside of me was really hard for me to get my head around, I’m only 4ft 11 after all so I was baffled as to how it can be that big. I had noticed that recently I had been looking more bloated than normal but didn’t think too much of it. My Surgeon pointed out that ”your tummy is so flat, it will be even flatter it’ removed”.

The prep for Surgery was even more blood tests and the week before my surgery date a meeting with my Surgeon who went through the process with me and marked out where the incisions would be.
A Laparoscopy is where 3 small incisions are made an the Abdomen, gas was then used to inflate the area so that the Cyst could be drained and removed. The whole process typically takes 90 minutes where you are sedated with gas.

Surgery day: I arrived for my appointment at 11:45am and went through all the required preparation of dressing for the procedure, being linked up to IV and having heart rate, temperature and blood pressure was taken where I was then given a light sedative before gas and at around 1pm was drowsily wheeled into Surgery.
I came round at 3:45 in recovery where I was told everything went well and was released shortly after with my bag full of medications including Antibiotics, 2 type of pain relief and stool softener (apparently it’s common to have problem afterwards).

Few hours after Surgery: Feeling sore and incredibly hungry. I hadn’t been ale to eat for close to 20 hours do to needing to be fasted for Surgery yet despite being so hungry I couldn’t swallow solid food, my mouth was really sore, dry and I must have drank about 100ml of Water. I was able to get down a Protein shake and some Yogurt.

4am Friday (day after Surgery): Woke up feeling like I had been hit by a truck which is a side effect of the gas. The nights sleep was restless and where I usually sleep on my stomach I had to try lay on my back due to my scars. 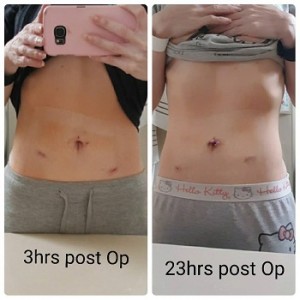 Friday: Spent the entire day on the couch in and out of consciousness due to the medication making me drowsy, the pain was bearable and under control. My little fur baby Tigger kept me company with lot’s of cuddles. My appetite had depleted yet still managed to eat more Yogurt and protein shake. I was able to clean the scars (3 of them) and put my belly ring back in. 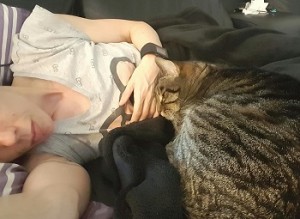 Saturday: I was going tire crazy at home doing nothing so Steve suggested we go see a film. We went to the Movies to see Jungle Book where I ended up falling asleep again. Another day of just having Yogurt for Breakfast we decided to go to Fahrenheit Pizza in Pleasanton where I managed to eat half of my Chicken Pesto.

Sunday: Curiosity got the best of me and I decided to weight myself.. 4lb loss since Friday. My initial thought was ”my gainz!!” many Women would be happy at such a loss but that’ a lot for someone already so small. I now weight in at 101lb.
I couldn’t sit at home for another day and the pain had pretty much gone so Steve drove us up to Sacramento for a visit to the Zoo, it was nice to be out of the house but probably a little premature for me to be venturing out as the pain kicked in meaning more medication and then falling asleep on the ride home.

Today I’m feeling much more like my normal self, the forced rest and not being able to go in the Gym or Run is driving me crazy but I know the rest is doing me good. I realized I haven’t taken a full on rest day in close to 6 months and am always going hard when I train so this is like a vacation for my Muscles.
I’m still a little swollen but the scars are looking a lot better now after regular cleaning yet I’m still not able to take a proper shower and clean the Iodine stain from my skin. I’m also finally able to eat regular foods.

One thing I cannot stress enough after this episode i that sure a Pap Smear is not pleasant but having these regular health checks are incredibly important and could save your life. Ladies, please don’t skip these! And guys have your regular checks too.