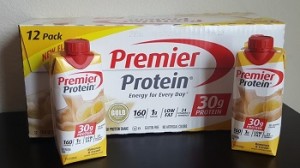 Premier Protein have done it again with the Ready to drink shakes and produced a Banana’s and Cream flavor. This is the fourth flavor alongside Vanilla, Chocolate and Strawberries & Cream.

I’ve been a huge fan of Premier Protein for almost 6 years now, It was the first protein my Husband and I purchased after moving from England to California, USA and although I purchase other brands I still stock up on Premier protein on a regular basis and Bake weekly with the Whey powder.
This newest flavor came as somewhat as a surprise as no hints were given about it being in the works. At least of there were I completely missed it and I was so excited when they contacted me and sent me a case of this new flavor to try. The guys over at premier Protein are amazing and really do care about their fans.

I decided to have one of these shakes after a heavy lifting session, first impression of the packaging is bright and appealing with all the nutritional information clear and easy to read. These ready to drink cartons use the same screw cap that was adopted around 18 months ago so it’s great for when you’re on the go or don’t drink a whole shake at once.
The shake smells delicious and is a kind of grey color, not what I was expecting (I was thinking it would be bright yellow. lol) and with the consistency of regular milk. 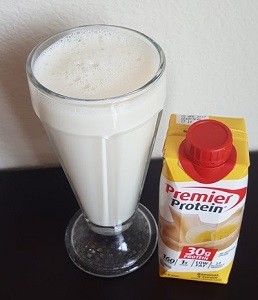 So the taste? First sip immediately reminded me of my childhood and love for Banana milkshake, sitting in the back yard sipping with a straw, No joke, the shake tastes just like Nesquik! The stuff I used to get back in Europe anyway. The flavor of this shake is spot on and really refreshing with a slight hint of the Protein being present. The best thing about the Premier Protein shakes is that the Macros are on point! Protein – 30g, Fat – 3g, Carbs – 5g and with just 160 Cal (25 Fat Cal). Comparing to other ready to drink Protein shakes these are in my opinion the best around for both taste and macros.

I recommend serving these shakes chilled by keeping them refrigerated or even put them in the freezer for 30-45 minutes before drinking for optimal enjoyment but they can be stored in a cupboard and consumed at room temperature but note that once a carton has been opened it must be kept in the refrigerator.

These can currently be found at Sam’s Club store’s. I’m hoping that in time they will also be found in other store’s and Costco for those of us that don’t have a Sam’s Club near us. 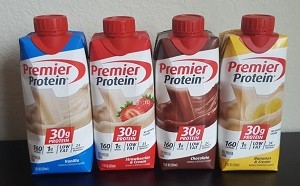 The ready to drink Shake lineup.