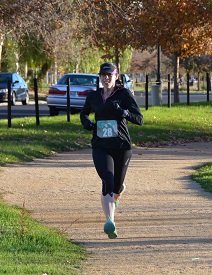 For the 3rd year Running the Jingle All the Way 5k has taken place in Mountain House and where I initially wasn’t going to Run decided to sign up almost last minute and damn I am glad I did because I not only beat my unofficial PR (20:14 set back in August 2013) but I completely smashed my previous years time (22:43) finishing in 19:44, 1st overall!

I have some of my fellow MHRC members for this because not one but 6 people told I must sign up for this and despite the busy day already had planned I managed to squeeze it in. It was a local 5k after all, not like I was driving 30+ to run a Half Marathon. 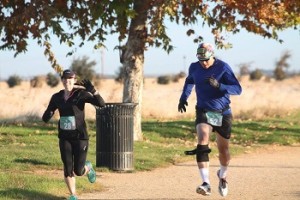 Morning of it was pretty cool to see a lot of familiar faces, Running Club members and a few team mates from Ragnar along with people from neighboring towns. From what I could tell everything ran smoothly this year and pretty much right on time we started.
I went into the Run thinking between 21 and 24 minutes was a good time to aim for considering both my Asthma and left Knee not playing nice.
The first part of the run was down the road before turning onto the Creek Trail where I spotted a few MHRC members and ended up Running with Randy for a very brief moment along the trail where a photographer got the 2 of us together (pretty cool btw! 2 MHRC members in one shot). Before I knew it I was speeding along the trail with 2 little boys who I guess were no older than 12, those are some fast little kids! Spotted another photographer and some cheering faces as I breezed through the aid and past the 2 little boys into the lead and feeling pretty darn awesome looking down at my Garmin I realized I was on track to beat my unofficial PR.
That was until I noticed my right shoelace had come undone. F**k!! I was just going to carry on running but knowing that at only about 1.5 miles in wasn’t a good idea. I would trip over the lace and face plant on the trail (which sounds funny but really isn’t) or I would loose my shoe altogether. I decided the smart move would be to stop and re-tie my lace, Actually the smarter move would have been to make sure it was tied properly in the first place and for not doing that I mad at myself but I clearly didn’t have my smarts with me that day.
Quick glance at my Garmin just as I stopped said I was averaging 6:11 minute mile and let me tell you.. Trying to tie laces with gloves on is not easy! 2 attempts and I had to remove them, quick re-tie and off I went realizing I was now averaging 7:24 minute mile. Thinking that I had completely ruined my chances of beating my own PR made me angry. I realize now that may have actually worked in my favor as I picked up pace on the last stretch of the the outward section of the trail and coming back down the other side of the creek I noticed I was back averaging 6:20 something just as I went into mile 3. If there’s one thing I have noticed that is not performing as good as I have done previously seems to light a fire in me and my determination to better myself spurs me on.

2.5 mile in had my lungs burning in the 30 odd degrees and I had to use my Asthma pump which was little relief and thoughts by the 2.80 mile point was that ”This shit is going to kill me one day”. Dramatic much? But thoughts quickly passed when I turned the final corner and saw the finish line in sight. Still in front position I ran down the path, over the crossing and through the finish line to see Steve filming me and hear Corey announce I was first overall and my time… Sub 20!! I do believe the first thing I did was jump up and down squeeling ”F**k yeah! I PR’d!” before realizing I couldn’t breath and needed water asap! 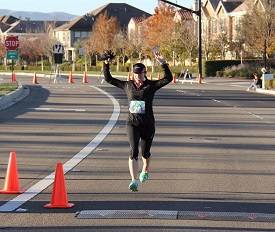 After the run I hung around for a bit seeing other people I know finish and talk with some of the club members while also attempting to refuel with some Muffins. And of course, claim my medal too which was some pretty sweet bling, very Christmassy. Medals were only given to those who placed in their age group and we also got an extra little something from NXT level.
I really like this annual Run and I hope is something that continues every year, even if I don’t Run it I’ll come out and support those that do.