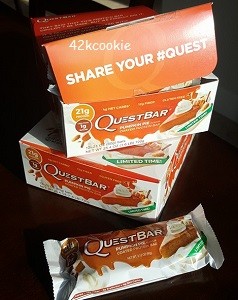 protein bar, after years of development was finally released 2 weeks ago on the 29th of September and I have to admit it was actually something I was pretty excited about myself. As an Ambassador and Affiliate for the brand I also aim to be on it with any new products and although I’m not a huge Pumpkin fan this was something I wasn’t going to miss.
I actually found out about the new flavor (by accident) quite some time before it was officially announced and not being able to tell anybody was torture! The flavor was announced on the 25th with pre order via the website that same day.

With recent changes to the Quest bar recipe the Pumpkin Pie is also one that has been affected with the use of Corn Fiber which alters the nutritional value slightly. Stats:

”Unwrap Autumn with the very first coated Quest bar. Enrobed in a layer of sweet buttery pumpkin, with a graham cracker crumble crust.” 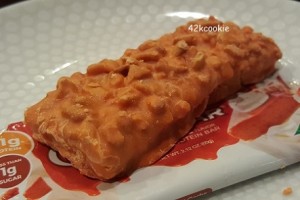 So there I am on the 29th with my Limited Edited bar in hand and cannot wait to get into it literally rip the packet open. Immediately I was a little surprised to find an orange colored bar coated with ”nobbly” bits a little like a Combat Crunch bar. I wasn’t surprised at the bits of Graham cracker but the color, I know I shouldn’t have been because Pumpkin is orange but I just expected it to be white for some reason.
Anyhow at the first bite I immediately knew that this was going to be one messy bar, the coating cracked which gave way to a slightly chewier than normal bar. (Note: If you’re trying to eat this on the go (in your car for example) then expect some serious clean up). 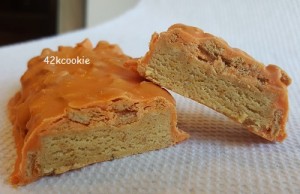 As far as taste I found it to be sweeter than the Quest bars I am used to, the Pumpkin flavor was very mild and overall more Cinnamon-y than anything. This actually pleased me as like I said, I’m not a huge Pumpkin fan but from the standpoint that it is supposed to be Pumpkin Pie I feel the Pumpkin should be more prominent. Overall I think Quest did good with this bar, It’s been in the making for years and from what I have seen so far it’s hugely popular. Heck, I even have 2 boxes myself!
This flavor is LIMITED EDITION and is only available until the end of the year but don’t fret, they have a long shelf life (my boxes have 11 months) so you can always stock up and who know’s it may even be brought back next year.

(I highly recommend the Protein powders too, especially the Salted Caramel. Use code ”LUVPRTN20” for 20% off.

Or from The Vitamin Shoppe and get yourself some Lenny & Larry’s Cookies while you’re there! Maybe some Peanut Butter too. 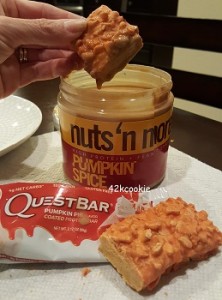