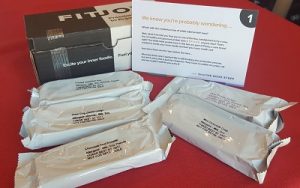 With a market already saturated with Protein bars and many more being released on what feels like a weekly basis it’s hard to keep up with what’s ”hot” or new” but these Fit Joy are most definitely worth checking out. They are still awaiting release date but thank you to the kind people in charge of their social media they reached out to me and sent me these bars to sample before being released to the general public.
The little note inside the box informed me that these are the ”bars before the bars” meaning they were still in test stages and not quite what the final product will look like. Quite an honor to be among the few ”testers” or ”Guinea Pigs” I guess you could call us. Hey.. I certainly didn’t mind one little bit.

Now.. the bars. They came in elusive looking plain white wrappers simply with the flavor written on them and a separate card with their nutritional information on. The macros are all very similar and on par with Quest Bars (I use Quest as an example because everybody knows these are they’re so easy to compare to). Macros are as follows:

As far a size goes they are on par with similar bars available so they’re not designed as a meal replacement but a snack. Think of it as just something to curb hunger and boost your protein intake in between meals. 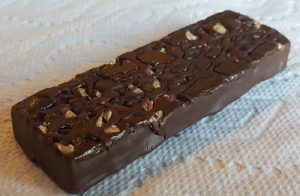 Upon unwrapping the first thing I notice is how appealing to the eye these bars are. Wait? These are still in test stages and not the final product? Sure could have fooled me. Each bar comes with some kind of unique frosting or topping, for example – the Chocolate Peanut Butter has little chunks of Peanut on top and the Frosted Cinnamon Roll something that I would describe as a Yogurt Frosting. Like I said, very appealing to the eye. 2 thumbs up.

These smell great! First whiff of the Frosted Cinnamon Roll as I opened the packet reminded me of the Cinnamon Rolls my local childhood Bakery had and the Chocolate Iced Brownie had a sweet almost nutty smell to it,

To say I am impressed would be  a bit of an understatement. Seeing that these were not final product actually had me somewhat apprehensive yet I really enjoyed each one. Some (Frosted Cinnamon Roll) more than others (Chocolate Chip Cookie Dough) I particularly liked the frosting on the Cinnamon Roll and the Nuttiness in the Brownie (Pecans?).

Soft, chewy and again very similar to Quest, maybe a little softer. I did however find that a couple of them did get a little grainy the more you chew, maybe one of the small adjustments that need to be made before final production.

Overall I was really impressed with not only the quality of the bars but also how quickly they were sent out and I am honored that I was given the chance to try these ahead of release.
So a little more about the company.. these are a part of the Cellucor Family and trademarked by NutraBolt. The bars came about when the CEO was diagnosed Celiac disease and has a severe sensitivity to artiﬁcial sweeteners which is why they contain no artificial flavors, colors or preservatives.
They’re due to be released to the general public very soon so be sure to sign up to the website to get notification and special deals by going to Fit Joy Nutrition