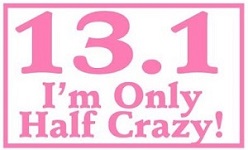 So if Running a Half Marathon makes you only half crazy what does running 2 make you? The term ”f**king insane” springs to mind but according to friends it makes me Hardcore. I’ll take it!!

Running 2 Half Marathon’s in one weekend really wasn’t in my plans this year, I haven’t packed that many miles into 2 days for almost 2 years and this last 18 month not even ran that much in a month so  taking on this epic running weekend was verging on batshit crazy. I’m not going to lie, I wanted the shwag. The weekend consisted of Livermore Half Marathon and Modesto Half Marathon. Livermore is part of the Golden State Series where if you complete all 3 Half Marathons (San Francisco, Livermore and Oakland) you get an additional medal and I figured that as I was part of the pacing team in San Francisco I was already a third of the way there so why not?
Then Modesto came up and some of my Running Club would be there and the goodies were even better (bottle of wine, Arm Sleeves and Recovery Jacket) I wanted those too.

I went into both events knowing that I wasn’t going to push myself too hard. Sure, to continue placing in my age group would be great but doing that many miles on a still-not-quite-right Knee would be intense so I went with the plan to add a good 30 minutes to my PR times and aimed for around 2:00 – 2:10 time for both events.

Every Run needs a ”Jazz Hands” or crazy face Photo.

Livermore being first, I absolutely love the course. It’s identical to Race to the Flagpole that I did last November, just in reverse. The scenery around Livermore and through the parks is beautiful with rolling hills, nothing at all taxing. It took a good 4 miles just to get warmed up and by mile 5 became apparent that trying to keep around a 9:30 minute mile pace just wasn’t going to happen. I tried, really I did but every time I got to that pace and didn’t look at my watch for a minute or two I sped up. It would appear my ”casual” running pace is around the 8:30 minute mile pace and I’m happy with that.
I had a great time running this event which is made clear by the photo’s taken and I feel like it was over really quickly. Seemed that no sooner did I spot a fellow MRHC member cheering people on at around mile 8 that it was all over. I was having such a blast singing along to my IPod that the miles just melted away, I was in my happy place and it’s Run’s like these that made me fall in love with Running in the first place.
I stopped along the course a couple of times to use the restrooms and finished with a time of 1:52, a little faster than I had planned for but still happy in the knowing that I CAN show restraint and don’t have to run balls to the ball every time. 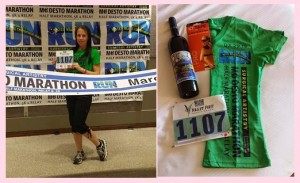 Modesto the follow day was a somewhat different story. I met up with the other MHRC members before we started and those first couple of miles were all hunky dory but then after about mile 2 I saw NO signs for the Half Marathon, just the Full and I spent almost 6 miles thinking I was actually going to end up Running 26.2 miles. At first I was cool with that but then soon became incredibly bored and was in no way happy at the thought of an additional 13+ miles of the course. The whole set up for the event was nice from the expo (although they ran out of my size Arm Sleeves) to the free photo’s and even post race goodies but the course… Oh. My. God! Long endless roads of nothing. The course was all asphalt with long roads that vanished of into the distance with nothing to fill the (what felt like) hours. 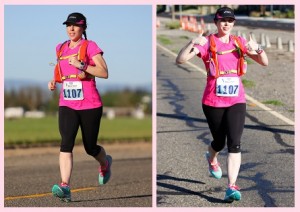 Keeping the spirit up despite the long boring road.

I’ve always considered myself to be a trail runner yet after this event there is now absolutely no doubt that scenic hilly trails are where my heart lays. I guess it also didn’t help that from around mile 6 my left Knee started to feel a little funky, there I was so concerned with my right Knee I didn’t consider the other could be a problem. Epic fail on my part.
Anyhow, the miles went on.. and on and finally at mile 8 there was a split for the Half / Full and that sign was probably one of the greatest I had seen in my life. I truly have a huge amount of respect for the people than ran the Full Marathon because that course must have tried even the most elite of Runners. 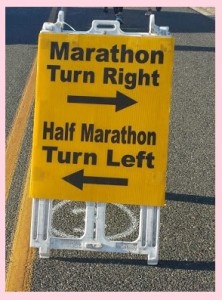 With the Knee issues and restroom / picture breaks I stopped 6 times along this course and finished with a time of 1:54. 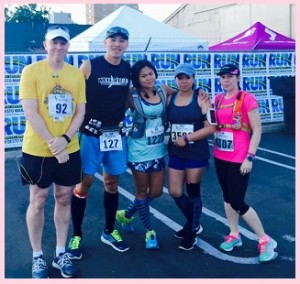 With some of MHRC (Mountain House Running Club)

Now that the weekend is over I’m glad I did it but really have no plans on Running back to back again. In the day’s that followed I nursed a couple of aches but nothing major and am just enjoying the fact that I completed my 10th and 11th Half Marathon in one weekend just 2 years after I started. I think it’s time for something new now. I love Running and always will but with ongoing Knee issues I want to concentrate my Athletic ability elsewhere, something that involves less impact and strain on the joints. Watch this space.

1 thought on “Back to back Half Marathon Weekend”