Tough Mudder is becoming more and more popular as the years go on, each year more people are becoming aware of it and each event has increasing numbers of participants every year.
So, ”what is Tough Mudder?” few people may ask. Well, it’s a mud filled obstacle course designed by the British special forces, typically 10-12 miles in distance which vary’s on location. It’s designed to challenge you with a lot of the obstacles involving an aspect a lot of people fear such as fire, heights, enclosed spaces and electricity. Sounds crazy right? It is! But it’s also an immense amount of fun if you’re with the right people. Tough Mudder is all about team work.

I’ve wanted to do Tough Mudder and been ready for it since 2012 but had a couple of things held me back :
1. Couldn’t find a group of people crazy enough to join me.
2. Severe Knee injury.
That was until this past December (Yay!) I was lucky enough to find an awesome group of people that welcomed me onto their team to join them at  Diablo Grande in April and although still in recovery from an injury a couple more months of taking it easy my Knee was well enough for me to take part. 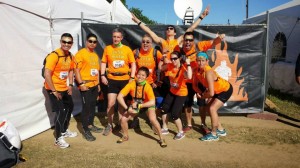 After months of excitement the day finally came and I won’t lie, I was actually pretty nervous. Mainly by the thought of being shocked by 10,000 volts and jumping off of something 20 feet high. Nerves didn’t last long though and once we were started I was having an absolute blast.
Diablo Grande is what even Tough Mudder called ”arguably the steepest terrain of all obstacle courses.” and it didn’t disappoint. The elevation level was less than my last Half Marathon but the inclines were steeper which being slightly sadistic and loving hill Running I really enjoyed but is a real bitch for those slightly less prepared. The first 3-4 miles were nothing but hills which then gave way to obstacles spaced out over the next 8 miles. I believe there was 25 obstacles in total, I may be wrong though as I completely lost count after a while. Obstacle highlights:

– Funky Monkey.
Despite *Arctic Enema not long before having my Triceps stiff and on the verge of cramping (they did within minutes of completing this obstacle) I miraculously made it all the way across! I really wasn’t sure about how to go about completing this and had 2 options 1. Take it slow one bar at a time or 2. Go as fast as I possibly could taking 2 or 3 bars at a time.  I started of slowly until my right Tricep started twitching telling me it was about to cramp so midway ended up changing strategy and going with the latter option. It was actually pretty fun and reminded me of being a kid again.
*Arctic Enema being submerged in water averaging 32F

– Kiss of Mud.
Lot’s of Mud. Which is the whole point, right?– Cage Crawl.
The color of the water was slightly un-nerving (yellow-ish) but it was nowhere near as scary as the pictures look. – Balls To the Ball.
A real test of upper body strength. Those ropes were slippery!

– Electroshock Therapy.
I said I was slightly sadistic, right? Well, I actually really enjoyed this last obstacle right before the finish line. Not so much being hit hard with 10,000 volts in my right shoulder but completing it with my team and watching other people get shocked too.

– Everest.
Ok, so I actually did not like this obstacle much at all. I completely psyched myself out on my first attempt and almost fell on my Ass but I did love the amazing team work shown by my fellow team mates (Go Skid Marx!) They really had my back and were there ready to grab me and help me up that evil wall. 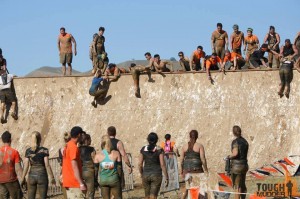 Look at that awesome teamwork!

The entire atmosphere and camaraderie at the event was great too with strangers helping strangers and cheering people on. Everybody was just so damn friendly! Something this Brit is still not quite used to.
A lot of people have since asked me ”Is it really that tough?” Some of the obstacles were but I personally didn’t find it much more intense than one of my every day workouts but I guess it just all depends on who you ask and how well you have trained for it, if at all. 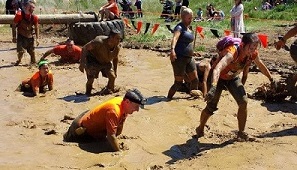 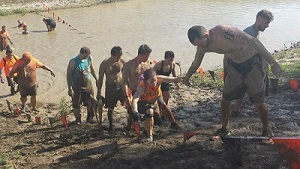 So there we go, another activity marked off my bucket list. But it’s not over yet! Skid Marx enjoyed this event so much that we’re now all preparing for Tahoe in August. I’m really excited because not only is it a different course but we have more team members too including my Husband who saw we were having so much fun decided he could do it as well. And to think I’ve been trying to get him to do it with me for 2 years now with his response being ”Hell no. I’ll die”. We’ll see… 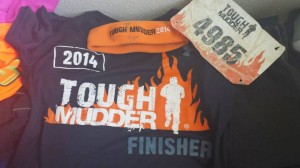