Since I ran my first official Half Marathon in February of last year I have been trying to get Steve (my Husband for those of you who do not personally know us both) involved too with very little success. The first two Half’s I signed up for I also took to signing him up for the 5k in the same event for two reason’s 1. So that he didn’t get bored waiting the 95-100 minutes it took me to finish and 2. So that he could get some exercise too.  Needless to say he wasn’t at all pleased and even after the two events my numerous attempts at getting him running the local trails fell flat.
Until this year that is. After me doing Tough Mudder he decided to join the team for the next one coming up in August which of course meant Running. Tough Mudder is no walk in the park and most courses are 12 miles. The most he has ever done was 7 to which he complained throughout the entire distance so we had a lot of work to do in just 3 months!

In our Running sessions and training I signed us bot up for 2 events to prepare him for the big day and I have to say I was incredibly proud of how he progressed. So how did the events go down?

”The Riveter” Half Marathon. Richmond, CA. 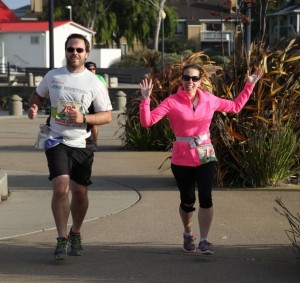 All smiles and happy between mile 1 and 2

Only having been jogging for 3 weeks I signed the both of us up for this event just for me to see where he was at physically so that I knew what work needed to be done for Tough Mudder and where I knew he wasn’t going to be able to jog all of it I was confident he would complete it even if it meant walking for the most part. Our aim? Under 3hrs.
Despite getting up at ass o’clock (4am) he started strong and made the first 5 miles look easy, slowing to walk and re hydrate occasionally and managed the first 7-8 miles without any visible issues only then the ”I can’t” became frequent but with a little encouragement he fought through and had a real sense of humor about the whole experience joking every couple of miles. Mile 10 was when it all went a bit pear shaped and we took to walking the next 3 miles, he was tired, aching and the Cheeseburger cravings had kicked in so I took to singing Linkin Park in hopes it would help.. I like to think it did as at the very last 0.20 mile the jogging started back up and crossed the finish line together. This for me was my favorite part of the run, it was a huge achievement and I was probably just as proud of him as he was of himself.

Favorite Steve-isms of the day:

– ”Oh look, there’s a photographer! Let’s make it look like we are actually running”.

Steve: ”Where is this turn? That lady lied!”
Me: ”She didn’t lie, she was encouraging. It’s what runners do”
Steve: ”Well she shouldn’t. It’s deceiving. And mean”. Before then pouting for the next half mile.

– Upon discovering we had to run through a Dog Park.
”What the fuck?? If I wanted to do a shit run I would have signed up for one”. (You should know that when we did Mud Factor last March we were essentially running through Cow poop.

A fun tine was had that day and we treated ourselves with a trip to Cinnaholic afterwards as post run food was nonexistent which was really disappointing. No Banana after 13 miles and no water at the finish line, not impressed. 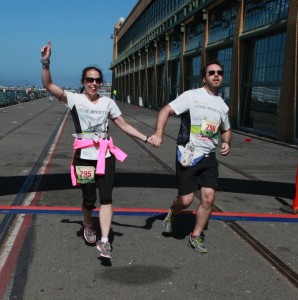 Crossing the finish line together

Bernadette, our Tough Mudder team captain encouraged us to sign up for this event and where I was wary at first due to my Knee still not being quite right we went ahead anyway. We opted for the 10k and used it as another training run for Steve to get him used to the hills.

Getting up a 4:30am to make the 60+ mile drive to Pacifica was not easy but I am so glad we did because we had a great run. The trail was beautiful with impressive inclines, I love incline running so I was in my element and even Steve really seemed to enjoy himself. As it was only a 10k the event was over pretty quickly and afterwards were rewarded with an impressive spread of food from the organizers – Waffles, Egg Burritos, Fruit and lot’s of Salty snacks. Definitely one of the better I have seen and an organizer I am eager to run with again. 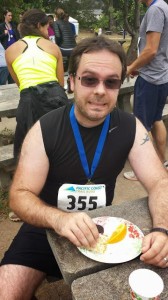 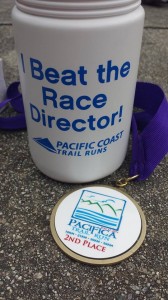 As for times, Steve came in with an impressive 1:25:18! And myself? 52:01. Not too shabby for my first official 10k. I came in 2nd overall Woman, beat the race directors time and even beat the course record time but best of all was sharing my love of trail Running with Steve.

I can’t wait to include Steve in more running events in the future! 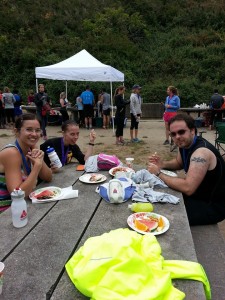