Tuesday of last week was what I call my 2 year ”Runniversary”. That is 2 years since I ran my first Race – The Niles Half Marathon in Fremont. I wasn’t going to blog about it but then I thought ‘why not?’ it’s quite a milestone and maybe (hopefully) in my writing about it I can motivate and inspire others.

Anybody that knows me or has read my past blogs know that I wasn’t always fit, in fact it wasn’t even a word in my vocabulary. That was until I lost a lot of weight and made the change to a healthier lifestyle. To put in into perspective, I was always the fat Asthmatic kid that got picked last for teams at school and in my adult life I wasn’t much better. I couldn’t even jog 0.25mi without having an attack and even after I had lost a lot of weight the first time I completed a mile it took 13:29 and I did not feel good afterwards.

Fast forward to 2013 and after a few years of working out I was in pretty good shape so decided to sign up for a Half Marathon ”for fun” really just so that I could say I had done one and gave myself a little over 2 weeks to prepare. I was really excited and Imagined to have great support from Friends and Family but what I got was quite the knock to my confidence. Instead of encouragement I got questioned ”Do you really think you can do it?”, ”Are you able to Run that far? It’s a long way”. The only person that I felt didn’t respond in a negative way was my Husband. Sure he didn’t understand why I wanted to do it and half jokingly told me I was crazy but instead of making me feel even worse about myself he agree’d to sign up for the 5k at the same event.

I trained hard for 2 weeks and the day before the event came I was really nervous, despite my progress over that time the negative comments still had me questioning myself and that night I barely slept more than 2 hours thinking maybe I shouldn’t bother Running at all.
Arriving at the event though, I pushed those thoughts aside and thought ”Screw you! I’m doing this for me and don’t give a damn what you think”. People had made me feel bad about myself most of my life and it was about time it stopped.
To say I am glad I went though with that race was an understatement. I was new to Running and knew nothing about PR’s or timing and I must have looked really out of place standing at that start line in my beaten up old children’s pair of Nike’s and $20 shorts while everybody else was in performance running gear, compression sleeves and fancy timing devices but once the alarm was sounded and we set off everything just didn’t matter.
I ran the entire 13+ miles with happiness in my heart and coming over the finish line to see my Husband there waiting was an incredible feeling, I had done something that not long before I had only dreamed of doing. I was handed my reward – a shiny medal and then congratulated by a guy standing nearby who pointed out I must have ”placed” due to my speed. I had no idea what he meant and so explained it to me pointing me in the direction of of the tent where we could check our times. I was not at all prepared for what I saw when I typed my name into the tablet, right there in the column that indicated your age group placing was something that had me squealing in delight and jumping on the spot – 1st! with a time of 1:39:10. It was an amazing feeling. I didn’t just complete it, I freaking rocked it and proved all of the doubters wrong. It was then that my real love for Running was born. 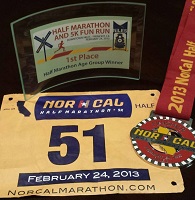 I then went on to place 1st in the next 2 Marathon’s I ran along with a couple of 5k’s (even a 1st overall) until the third Half Marathon I did was where I severely injured my Knee and I had to take a break. But I’m going off track here…
My point of this post is do not to let other peoples negativity question your own capabilities. Chances are you can achieve way more than you think you can and with a little bit of self belief awesome things can happen. 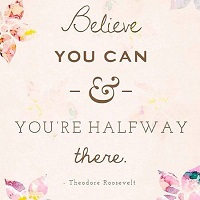 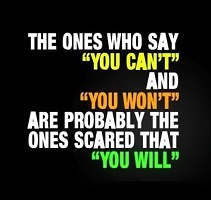 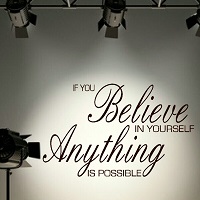