As like any Athlete, with being a Runner comes injuries. Some can be minor and pass quickly, others may linger for years and even have you give up doing what you love. One of the most common injury’s is ”Runners Knee” and something I have had the misfortune of experiencing for the last 18 months.
The technical term for Runners Knee is Patellofemoral pain syndrome (PFPS) and is an irritation where the Patella (Kneecap) rests on the Thighbone caused by the stress of Running. The pain vary’s and can be an extremely painful sharp pain or a simple dull ache and often disappears while Running only to return once rested.

I started to experience this aching pain around 18 months ago and only having been Running for a short time was not well educated in the possible injury’s and sought advice from my Doctor who ordered an X-Ray which of course resulted in being told everything was ”fine” as PFPS is not something that shows up in an X-Ray.
I took to periods of resting in between periods of Running and at the beginning of the year even took to Running official Half Marathon’s. I did pretty well too, placing first in my age group with a time of a little over 1hr 30mins in my first ever Half. It’s safe to say that event was my downfall and I got the bug. Entering into a further 2 Half Marathon’s among various 5k’s and making my injury worse until my latest on the 17th August at Castle Rock.
Castle Rock was a different kind of Half, it was described as ”very challenging” with the trail going right to the top of the peak (almost 3,000 feet) and back down the other side. Having been used to Running 10-15 miles daily I wanted a challenge and it was… the downhill at least.
The first 6 miles was pretty much all uphill and when I discovered that it’s uphill I excel at, going from the back of the pack past dozens of people and into the first 5 Runners with absolutely no Knee discomfort but then as soon as downhill hit at just past mile 6 then pain really kicked in. Runners Knee is often a lot more painful going downhill due to the extra pressure and strain on the joint and this was no exception.
Any normal person would think twice about completing the race but not stubborn me, I carried on which resulted in a very prompt trip to my new Doctor 2 days after the event which was where I learned more about my injury.  After a quick MRI scan it also turned out that as well as the PFPS I also had a partial tear in my ACL which resulted in months of frustrating rest and Therapy.

Almost 5 months on my Knee still isn’t quite right, I have 2 Physical Therapists I visit on a regular basis as well as a specialist that has mentioned the possibility of surgery on more than one occasion, this worries me. I am however Running again, certainly not the 60 miles a week I was doing earlier in the year but between 2 and 5 miles twice a week. It’s tough and often at around mile 2 I start feeling some discomfort which is when I feel I should stop but my Therapists assure me that it’s not serious and are encouraging me to go further. 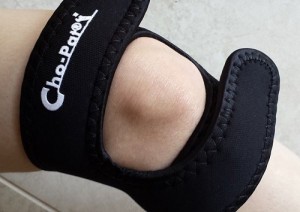 Bracing my Knee before a Run

As part of my therapy I have a lot of exercises to do which involve me strengthening my Quad Muscles. I’m embarrassed to say that since I started Running more a year ago I neglected those muscles for a while contributing to the pain, I am paying for it now though. Also this last week I started taping my Knee too which seems to help and have also invested in another Knee brace. 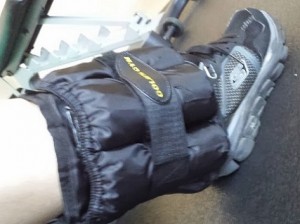 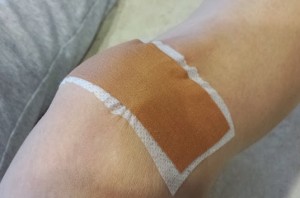 I feel positive about my recovery but am also questioning my Running future, I never did get to complete that Marathon (London) I was supposed to almost 4 years ago and again 2 months ago. I even wonder if I should enter into anything more than 10k’s from now on. I have a few events coming up – three 5k’s, one 15k and also Tough Mudder in the Spring.

Tips for dealing with Runner Knee:

– Rest! Something no Runner wants to hear but this really is the best treatment.
– Brace it! Having tried 4 or 5 different so far Cho Pat are what I consider to be the better choice.
– Ice. After a Run ice for 20-30 minutes.
– Elevated it. While seated keep in elevated in front of you on a soft surface,
– Strengthen. Should the pain continue, see a specialist who can advice the best strengthening exercises for you.