Some have called me crazy, others hardcore but one thing can be said is that I rarely ever quit. Thus, it’s a combination of all of these that recently had me run two, yes TWO Half Marathon’s in one day. When the day started I didn’t intend to though, it just kind of happened.

Sunday 5th October I was registered to run the Tiburon Half with a newly made friend Megan, a member of our most recent Tough Mudder team. A newbie to Running this was her first Half Marathon as a Birthday gift to herself, I couldn’t see a new Runner tackling their first Half alone so we got up at Ass O’clock (4am) and made the drive over into North Bay. 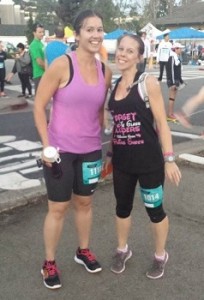 Getting ready to start the Tiburon Half

With a 7am a start we started off with no real plan of action but to just complete it.. together. Before this Summer any Half Marathon would have had me Running flat out ”balls to the wall” in order to PR but something strange happened very recently and that was that I realized I am way too competitive with myself. I’ve already proven myself to be pretty damn badass and surpassed even my own expectations so have took to taking a step back from pushing myself so hard when it comes to Running. After pacing my Husband, Steve in his first Half Marathon I found that the fun had Running with someone else and finishing together is just as satisfying as be awarded that first place medal and beating my own time. 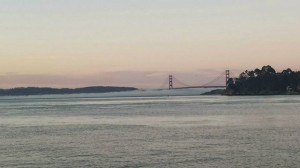 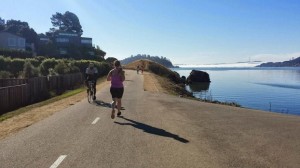 Anyhow.. we did indeed finish together and it was a great moment to share Megan’s first Half Marathon finishing line.
The course itself was for the most part beautiful with views of the San Francisco Bay and the Golden Gate Bridge. We Jogged along the coast watching the fog rise off of the water and cloak the Golden Gate Bridge and The City while being warmed by clear early morning sunshine and a clear blue Sky. Conversations went from our recent Tough Mudder to past Beau’s and making fun of my ”funny accent”, with multiple restroom breaks along the course it was easy to forget just how many miles we were covering and came to a finish with a time that was well, somewhat longer than I am used to but completely irrelevant. 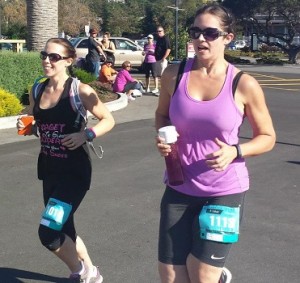 Post race we headed back into East Bay towards home stopping for some Brunch along the way. 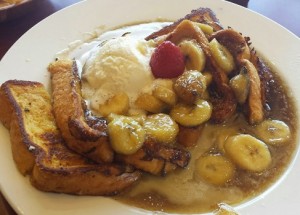 There must have been a shit load of sugar in that Brunch because aside from almost giving myself Diabetes I went from being half asleep to wide awake and come 2pm I had my second wind and decided I wanted to go for another run. Having signed up for The Blerch Virtual Run I figured it was the perfect time to knock out a few miles to earn that medal and T- Shirt and with my Knee still not 100% I decided 5-6 miles at around 9-10 min mile pace would be enough to douse my running urge.

So what happened? I happened! The endorphin’s started flowing and once I got to mile 5 there was no stopping me, I figured I was over a third of the way there so I may as well round it off to respectable 13.1. Finishing up with 13.56 miles logged I felt amazing! I’ve never completed that many miles unplanned before and certainly not on just 2 hours sleep. It was a great day, I supported a friend and newbie Runner in their first long distance run and I beat my own record proving to both myself and everybody that has ever doubted me that I am pretty damn awesome. October the 5th 2014 shall forever be known as the day I completed two Half Marathon’s just because I could. 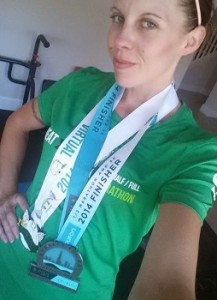 Sweaty and disheveled after Running 2 Half Marathon’s