Sunday the 2nd of November in San Francisco 5,000+ people gather to run the US Half Marathon and there I am amidst it all with a Pacing sign in my hand ready to take on the huge responsibility of helping people finish in their desired time. Who would have thought?

I got the role of one of the five Pacers for this event just day’s before through Marathon Matt and was really excited to not only Run the first part of my ”Golden State Series” across the Golden Gate Bridge (somewhere I have wanted to Run since we moved to California over 4 years ago!) but also have the huge honor to be trusted with such a job.  I won’t lie, at first I was extremely worried about the pace I was supposed to do – 2:15! That’s 35-40 minutes slower than my usual pace and I wasn’t even sure if I could go that pace for that period of time but I took it as a challenge to teach myself restraint that I actually succeeded at. 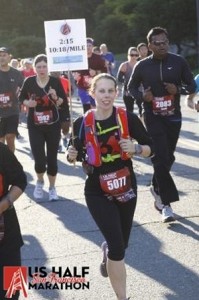 We set off right on time at Aquatic Park and ran along the waterfront towards the bridge where I soon discovered that running a 10:18 minute mile was not my strong point but found a couple of people going that rough pace that I could talk to and before I knew it 2 miles had passed and I had a little more confidence in myself and the job ahead.
We soon approached the first set of restrooms where I took a quick break setting me back to a 17:52 minute mile and had the incline up to the Bridge to make up my time. Hilarious moments pursued where I heard people cuss and swear that there was ”no way she’s doing a 10:18 mile” and a few question how I was able to run so fast uphill. Yet I couldn’t stop to explain why so fast and by the time I was on the bridge I was back on pace and enjoying the gorgeous views of The City and Marin County in the distance, pausing occasionally to take a picture. 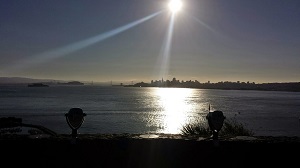 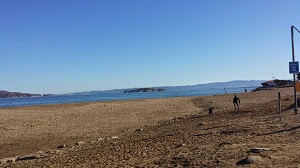 Once in Marin we did a quick loop before heading back onto the Bridge where the next 3 miles all kind of blurred into one where I was going an average of just under 10 minute mile for the best part of 8 miles and once going through the Golden Gate National area at the 11 mile mark I knew I was slightly ahead of time so had to really slow down my pace and even took a minute to stretch as to not come in too early.
The last couple of miles seemed to pass by really slowly, partly because of my even slower pace but also because of not having any water. I had my new Nathan vest which I used with the bladder from my Camelbak but had been carrying ”dead weight” from about the 3 mile mark as that’s where the valve clip had broken off of the tube and was unable to get any water out. I was pissed and Camelbak have since received a strong worded email from me.  Anyhow, the beautiful views of the Bay and cheering on other Runners helped take my mind off of the lack of water and before I knew it was coming in to Aquatic Park and towards the Finish Line where I came in almost right on time at 2:14:15 and Steve right there waiting for me, Camera in hand filming my joyous moment of accomplishing something new. 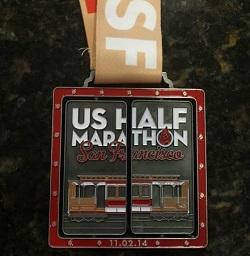 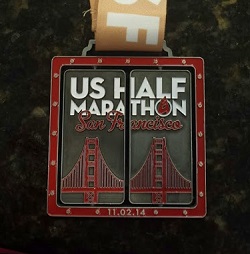 Doing this event I met some really cool people, I kind of wish I had connected with them on social media before we parted ways. I must have chatted with about a dozen people along the way all commenting on how helpful it had been to have me there pacing and my awesome taste in music blaring from my Boombot keeping them motivated. 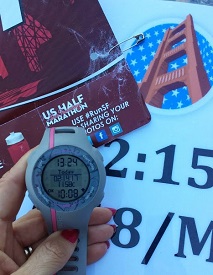 The course is slightly longer than a Half Marathon, other people had mentioned this from previous years and I agree as my Garmin also measured it at 13:24 miles, not a huge deal though.  Taking part got me some rather cool bling too, A rotating medal that has The Golden Gate Bridge on one side and a Cable Car on the other. Having this hung on my medal display has me really looking forward to the Livermore Half in March and eager to then complete The Towns Half next August and claim my extra medal for completing the series. Who knows… I may get a Pacing gig for that too! 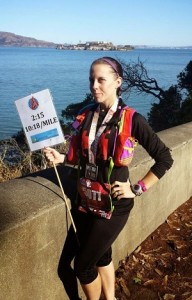