Ok, I’m just going to get this out of the way now.. PR, Baby!! I think the phrase I muttered under my breath as I crossed the finish line was ”Holy shit balls, I just PR’d!”.
I was actually amazed at the time I finished in as aside from telling Steve (my Husband) that I was aiming for a ”Nice moderate pace to enjoy the course. Around 2hr – 2hr 10min” this was the first Half Marathon I after my Knee injury 17 months ago that I was running for me and it was on a hilly trail. My official finish time was 1:37:38. 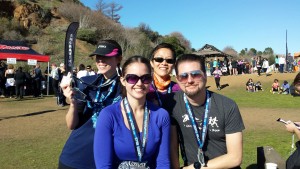 I started off just going at a pace I was comfortable with, just enjoying the view and not really concerning myself too much with my pace, then I noticed that at the 10k mark I was just 43 minutes in and it became apparent I was on track for that PR.
I somehow spent a vast amount of the 2nd loop running in 2nd place female until those downhills got to me and 2 ladies overtook me. The lady that finished in 3rd place also beating me to 1st in my age group (she was the same age as me – 33) finished just a minute faster. I can’t be angry though, she totally rocked it and I still came away with double medals and a new PR.
Part of me wishes I had taken the run a little more seriously though,  spending less time talking to other runners, texting Steve and photo bombing peoples pictures because I may have even beat my unofficial PR (1:33:47). Oh well, I feel since my injury I have grown more as a person and am now more about why I started running in the first place and that is for the enjoyment. 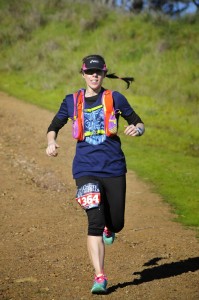 This was the first time I had actually ran a Brazen event, sure I’ve volunteered before but that’s not the same. The day started off cold and the 3mile Cycle we took for the event parking to the start line did nothing to warm me up. Meeting with some friends at the event we picked up our packets which was a breeze and the T-Shirts for the event didn’t disappoint, short sleeved tech with Coyote design on.
The event consisted of 3 distances – 5k, 10k and Half Marathon with the The Half being 2 loops of course, where people had complained about this previous years I actually liked the idea as you know what you’re in for during the second half of the run, something you don’t get with every trail event. We started on time and almost immediately the views were beautiful, we started the first couple of miles through the marshes which then gave way asphalt and eventually gravel and rocks with a few hills here and there, nothing major. As a hill runner I was hoping for some steeper inclines but these sufficed, especially considering that after running uphill you then have to run downhill (urgh) where I generally have to slow down. 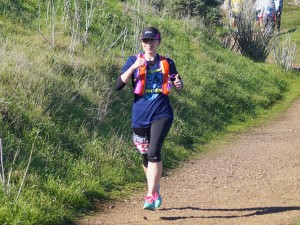 Being back out on a trail running after so long felt good. Really good. In no time I was completely lost in the scenery with UB40 and Linkin Park playing on my IPod that I think I completely missed a couple of photographers which I later noticed this event had a lot of! Both these and the Aid stations were well spread out with some great volunteers cheering and directing runners where they needed to go.
The course got a little crazy after a short while where the other distances had started, not long before I was running almost solo for a couple of miles I was then in the middle of a giant mass of both walkers and runners going in both directions. This gave me opportunity to talk to a few other runners which was nice though. There was ”Old Guy” who I discovered hates downhill running just as much as I do and was doing the course for the 3rd year. Then there was ”Tall Dude” who informed me he had been trying to catch up with me since I overtook him about 4 miles back. Oh.. and the cute little kid who was running alone, bless him! 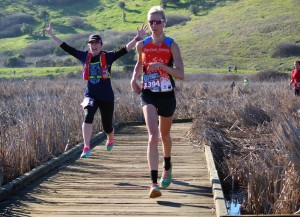 One thing I noticed with this event is that a lot of people that run Brazen are competitive and very serious! Aside from the Woman that elbowed me out of the way so that she could get to the front of the start line there were a few people that really didn’t like other people passing them and had game face on for the entire course. Enter Emmalou! Yeah, I sang to myself out loud for a while and even tried photo bombing those ”serious runner” pictures too. I think I may have pissed a few people off but hey.. if you’re not having fun why bother? 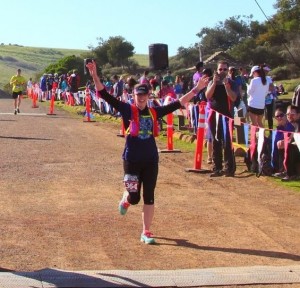 The finish line came quickly and was delighted to see Steve, Bernadette, Megan and Chris all there waiting for me cheering. I’ve never had more than Steve there filming or taking pictures before so to have someone there as I celebrated a strong finish felt so good. We chatted for a bit before I then dashed off to hit up the huge spread of post run food. Brazen events never fail when it comes to food and the spread had everything from Fruit and Bagels to all kinds of Chips, Cookie, Cakes and even Pie and It’s It Ice Cream sandwiches!! There was also Nesquik giving out bottles of Girl Scout Cookie flavored Chocolate Milk! 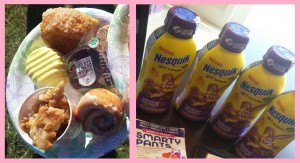 All finishers get a medal with Brazen which are heavy duty and designed for each event, as I also placed I got an additional one to add to my collection. They have engravers on site too and charge just $10 per medal. 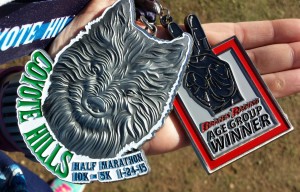 This was a great event and glad I picked it as my first Half Marathon of the year, I’m not sure how many more Half’s there will be after my double weekend so we’ll just have to see. One thing I did learn after this event that with all of the extra muscle I have gained in the last 8-9 months is that my body doesn’t like distance running as much as it used to. With that in mind I may just have to work on setting some kick ass PR’s for 5k and 10k.