Sunday had me Run something I first intended to do last year but had to rethink due to my jacked up Knee – The Hot Chocolate 15k in San Francisco. I’ve not ran an official 15k before, I went straight into Half Marathon’s and certainly never ran anything that rewarded me with Chocolate at the end! This seemed like a good thing in theory but but on looking back, large amounts of Chocolate that early in the day is NOT a wise idea.

Anyhow, I signed up and shortly after Megan signed up too so we planned to meet and run together, a lot of the members of the Mountain House Running Club were also going so I was looking forward to seeing some of those too. Only come Run day there were so many people there I simply couldn’t find anybody. Whatever. I guess there’s always other run.s
I was placed in the first Corral of the 15k due to my pace but decided to move back and start with Megan. We ran the first 5k together at her pace then as she had to slow agree’d that I would carry on ahead at mine for the other 10.

It was a nice course. Starting in Golden Gate Park and running down the coast and back into the Park at the end. I’ve never actually been IN the Park on foot before so it was certainly a new experience for me, the views were pretty but darn it! The course went past a mini waterfall not 1 mile into it making want to pee almost immediately, I managed to hold out until about mile 5 but when you gotta go you gotta go. Luckily there were restrooms along the course along with ”Aid” stations filled with Candy. The first station was Chocolate Chips of which Megan and I grabbed a few but then swiftly trashed them, the second stations was Strawberry Marshmallows. What the what??! Ever played that game Chubby Bunnies? Well, Running and trying to eat a Marshmallow was kind of like that. Had they put a Photographer after that station there would be some hilarious pictures! Anyhow, the third station I skipped completely and only found out after the run that they stocked Tootsie Rolls. Not something I would want to eat EVER let alone during a run.

The run for me went smoothly. As it was my workout for the day I wanted to do it in a respectable time without pushing myself too hard or running too fast, my Knee still isn’t quite 100% after all, I was aiming for around 1:30. Megan and I did the first 5k in 32 minutes then the last 10k alone I did in 44 minutes which is actually pretty fast but it really didn’t feel it at the time, there were a few hills towards the end but nothing too taxing. I was pretty pleased with my 1:16 finish time which turned out to be 30th in my age group of of 1,000+ people. Not bad for not actually racing and best of all my Knee was in no way pissed at me! I think I now have this new strategy of not pushing myself too hard nailed. 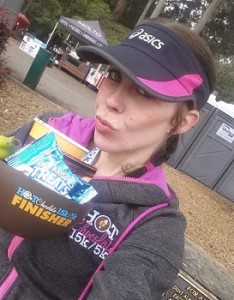 Post race wasn’t your usual grab a Banana, Bagel and Water but you got a Bowl of Chocolate Goodies = Hot Chocolate, liquid dipping Chocolate and a few bits to dip (Banana, Marshmallow, Krispy Treat, Pretzels and a Wafer) . I skipped the Wafer and Pretzels but did end up scooping out about 70% of the melted Chocolate with my finger before feeling really sick. I know a lot of Runners swear by Chocolate Milk after a Run for recovery but this was something else. Great concept but not a good idea to even try consume that much Chocolate at 9:30am. 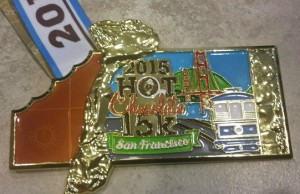 The Bling and ”Goodie bag” for this event were well worth the entry fee though, I absolutely love the Hooded Sweatshirt which although I got an XS is still kind of big it was much needed on the cold San Francisco morning. The medal is a really cute Chocolate Bar design and heavy duty, it looks great in my growing collection.

Steve met me at the Finish Line but didn’t get a Video or Pictures as he completely missed me (booo) but the important thing for me was that he was there. It doesn’t matter how big or small the Finish line he is always there supporting me. I love him for that. 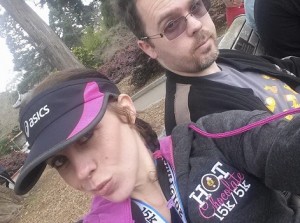