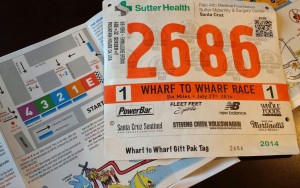 Since I ran my first official race last February (Niles Half Marathon) I’ve become very aware of other local races and this event peeked my interested when fellow members of my Running Club told me they had heard good things about both the race and the course. Better yet, it excited me a little as a good friend, Tram lives in Santa Cruz too and I thought it would be perfect opportunity to Run together after her telling me she wanted in on some of ”crazy Running adventures”.

Sign up for me was very easy, I entered my average pace, personal details, paid and then a few weeks before the event I received my bib in the mail. Tram didn’t have quite the same good luck although got charged never received her bib! Luckily she has a great boyfriend and when I found out the local Fleet Feet had a limited number of bibs sold back by Runners who could no longer attend he went and picked one up for her just so that we could run together. Race day comes and Santa Cruz gets crazy busy!! 16,000 people attend this event every year and is sold out in no time. Corals are given based on your average pace which is supposed to alleviate road blocks but people clearly do not understand this as people that should have been in coral 3 or 4 were in 1 and 2 and vice versa. Once given your coral you can move back but not forward and being placed in Coral 1 I moved back to run with Tram as her Coral had already been set by the person who originally had the bib. The course is beautiful, yes but really not the sort of event serious Runners like myself should attend unless registered as an Elite Runner or are right at the front of Coral 1. walkers were all over the place and people zigzagging left right and center throughout the entire 6 miles, it was mildly organized chaos. The course was littered with numerous bands and spectators cheering or on hand with hosepipes spraying people with water, not something I appreciated but some people seemed to enjoy it. 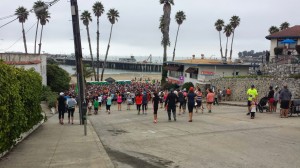 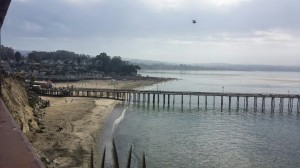 Post race festivities were on the Capitola beach, I didn’t see much festiveness going on as we just picked up or goodie bags before heading out. The bags were pretty cool – Drawstring bag containing a T-Shirt, Bottled Water, Prickly Passion Lemonade, Power Bar Wafers, Trail Mix, a Fruit Chew Bar and a Chapstick. NO Banana’s! Which kind of sucks as that’s one of my favorite parts of a Run. I always say that if I’m getting up at ass o’clock to run then there better be a Banana and some bling at the end of it, at Wharf To Wharf there was neither. Still, I had a fun time and would happily go back and do the run without the other 16,000 other people in attendance. 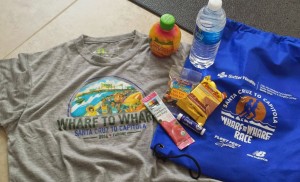