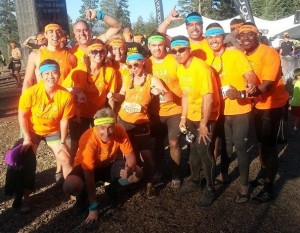 Wow, hard to believe Tough Mudder: Diablo Grande was almost 5 months ago and now Skid Marx have just taken part in their 2nd event of the year! For Tahoe the team increased somewhat in size with a very respectable 12 members, it was initially supposed to be 13 but sadly we lost one, Vincent Rafferty due to oral surgery just days before but where he may not have been there physically he was there in spirit.

As Tahoe was such a trek we all decided that a Cabin for the weekend would be the way to go and both Bernadette and myself set about trying to find somewhere, with such a large team and only 3 months until the event it wasn’t easy but we got really lucky when I found a large cabin located right in Truckee. Prime location for our weekend trip! Most of the team arrived by Dinner time the night before the event with the rest early hours of the morning. It was an early start on the morning of the event with last minute customizing of shirts and fueling for the day ahead. Arriving at the event parking and navigating around for pick up was relatively easy, the packet pick up station was a little crazy with hundreds of people all waiting to get on the cable car ride up to the start already and already being at 6,000 feet this course is no joke. I would like to say we started on time without any hitches but that would be way too easy, there seemed to be huge delays between warm up and actually starting which had me really loosing my buzz quickly. You start in the warm up section where we waited to start the warm up for around 15 minutes then once it was done we were moved to the start line where more waiting ensues as the group is then divided into multiple waves that go off 20 minutes apart. A lot of standing around meant that the warm up was pretty pointless, I hope future events are a little more organized.

That first incline was pretty intense for some people and soon become clear that struggles were to be had which sadly resulted in the loss of Bernadette and David very early on due to Bernadette having an old injury flare up during the week leading up and David not wanting her to go alone. It was a sad moment but we all powered on. The first few miles passed quickly and the course opened up to the occasional obstacle where the team worked together to conquer them. and the incline increased. Camaraderie from other teams was strong here, more so than Diablo Grande I think, everybody was looking out for each other and I had a blast helping strangers through and over obstacles. It got to the point that I ended up carrying some guy I had never met on Warrior Carry because him team was of odd numbers. Great picture opportunity!! 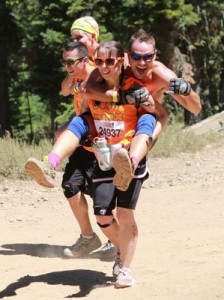 What with all of the inclines, elevation and different fitness levels the inevitable happened somewhere around mile 5 and the team got scattered, I tried to stay in the middle of everyone to try and keep the team somewhat together but failed miserably and ended up doing a lot of the course with just the 5 of us and teaming with another team to do Pyramid Scheme. It was a sad moment as it really was one of those team obstacles I think we would have all rocked, along with Arctic Enema right before it. However the team did all rejoin briefly as we powered up yet more inclines where the elevation was really getting to Steve with periods of dizziness and constantly feeling sick. His actions over roughly 3 miles that had me very proud, fighting through and adamant to continue playing catch up with the team members that were faster than him but it all finally got too much between mile 7 and 8 where he and Rick had to back out. I won’t lie, I was upset. This one last steep incline was all that stood between him and the decline where I know he would not only be able to complete but also speed up. I feel that had he been able to take just a few minutes rest he would have rocked the course and we would have done what I had hoped to do all along and that finish together.  But then you don’t always get what you want. 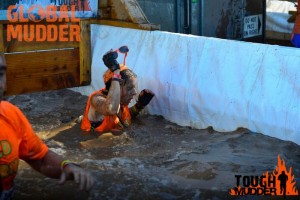 Those last 5 miles were relatively easy with a few more obstacles and the new addition of ”Legionnaire’s Loop”. This year also had the Funky Monkey made harder by the angle of the bars being made 30% steeper. That said all but one of the team that attempted it completed it, that being Myself, Nathan and Heather for a second time this year. I don’t know if it was the loss of so many team mates or the thin air but the spirit of the remainder coming to the finish line seemed sombre. We were hungry and some were injured which probably didn’t help either so meeting up with the ”fallen warriors” was a great moment. We may not have all completed and finished the course together but we were  team and later celebrated as one with Pizza, Shots and some hilarious games of Telephone Pictionary back at the cabin. Having been my second Tough Mudder now I can officially say I am hooked and fully intend to earn myself that black x10 Mudder headband, hopefully before I hit 40 too! Steve and I already have our 2015 open ticket for any Mudder event and should we participate just the 2 of us or in a team it’s going to be a blast! 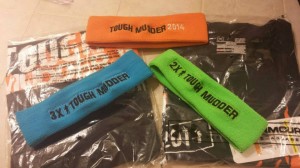